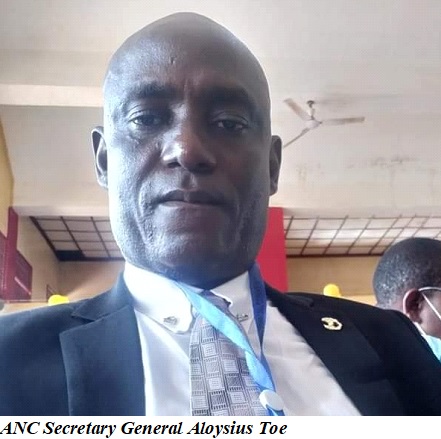 In the wake of reports that Gbarpolu County Independent senatorial candidate Madam Botoe Kanneh and her delegation were recently intimidated, harassed, beaten and arrested by state security who were reportedly acting on orders of Minister of State for Presidential Affairs Nathaniel McGill, this paper has received fresh information from impeachable sources within the opposition bloc that Collaborating Political Parties (CPP) Secretary General Aloysius Toe and team have been rearrested in Gold Camp while on their way to Monrovia.

According to latest information from Gbarpolu, Cllr. Aloysius Toe and team, including Cllr. Boakai Kanneh, were rearrested and taken to Bopolu city to be officially charged by the government.

“Thus is a clear attempt by the government to keep them in custody for another 48 hours. They are now political prisoners under this government,” our source lamented.

It can be recalled that since Sunday, December 13, 2020, reports started filtering in from Norma, Gbarpolu County Electoral District #3 about a wave of electoral violence against Independent Candidate madam Botoe Kanneh who was reportedly  arrested by armed men believed to be state securities.

It was also reportedly that the brother of Ms. Kanneh, Cllr. Boakai Kanneh was allegedly ordered beaten by the traditional group in Norman, Gbarpolu electoral district 3. Already, the NEC has called for a rerun in the disputed four polling places.

CPP Performance Hailed as “Monumental” – A Sleeping Giant is Awake

“It is legal to abolish LACC” – Supreme Court Denies Cllr.…

Weah Scores another Feat in Education -Dedicates Public School in…