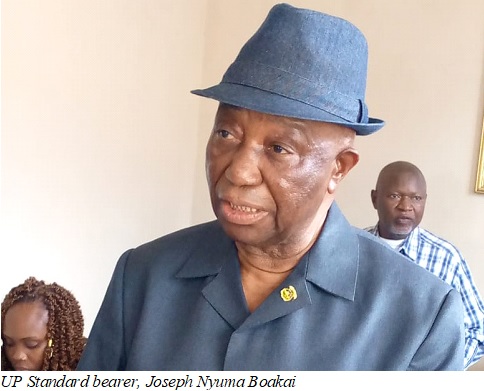 MONROVIA – With the clock ticking faster and closer to the D-Day of the 2023 Presidential and General Elections, former Vice President Joseph Nyuma Boakai who is expected to contest the presidency as Standard Bearer of the opposition Unity Party, has come out with guns blazing at the ruling establishment. Among the plethora of issues that Ambassador Boakai is raising against President Weah and his governing Coalition for Democratic Change (CDC), the UP political leader says he is confident that the Liberian people will recover from their 2017 mistake and vote Mr. Weah out of power due to his administration’s lack of performance, and wondered when and where did Mr. Weah and his CDC sign a 12-year contract with the Liberian people for them to remain in power after 2023.

“I don’t know whether they have a 12-year contract; probably they think they did. But by their performance, it doesn’t suggest to me they have any 12-year contract. We believe even if we give CDC another three months or one year, this country will be in more chaos. So, we’re going to rescue this country. The Unity party is very united and the Unity party is making every effort to grab state power in 2023,” Ambassador remarked when he appeared on Truth FM’s Truth Breakfast Show yesterday.

Speaking further on how a post-2023 Unity Party government will set the roadmap to rescue the country within the first 100 Days of its administration when he comes to power, Ambassador Boakai explained his AREST platform to the Liberian people.

He explained that during the 2017 election, the Unity Party platform was basically geared towards roads rehabilitation and construction.

“When I said roads, roads, roads, I meant it seriously; because there are a lot of people who talk about rebuilding the economy; they talk about bringing foreign investors. But you must always know that you have to start with yourself. What do you have? God has given us a  beautiful country; land and resources.

“So, I have now come up with a platform that is summed up in AREST. It means we have to look at Agriculture. We have to look at Roads that are very crucial to development. We have to look at Education that is highly necessary. Mind you, you can’t bring investors into the country when you don’t have a society that is literate, with the young people that are capable. You don’t expect the investors to bring all their expertise into the country. So, you also have to talk about Sanitation. We talk about health in general, but Sanitation is still critical. Most of the problems we have, we are not strong in curative medicine, but we can still prevent diseases. And we can start with sanitation. Then Tourism, which will be an icing on the cake because our country has all of the touristic potentials. The economy will bounce back, the young people will be educated, to make sure we equip them so people don’t take their jobs away from them. The Unity Party is very strong on these issues and we are working on them,” Ambassador Boakai assured.

On the issue of whether the Unity Party, which recently left a collaboration that accrued victories in the past senatorial by-elections, can make any impact in 2023 against the ruling CDC, VP Boakai remained philosophically confident that all is not lost.

“Yes, when you come to something, you come there with your mind. You want it to work. But you also have to remember that in life, not everything that you go into, as long as you are dealing with people, you should know that some things might not work. In life, you plan for possible outcomes that you may be able to meet. We had a very good purpose of mind to come together, and the public was on our side. But we found out sooner or later that there were forces that were working against it. Sometimes it’s good to throw in the towel and move on to something else.

“Every time someone divorces a wife, they look for another wife, right? So, it’s not in the absence of a partnership. We have created a coalition that will be reliable, trustworthy, that will be committed to the cause of the Liberian people. And we are doing that,” Ambassador Boakai stated reassuringly.

The UP standard-bearer further stated that it would be a complete misjudgment for the ruling party or anyone to assume that because of the internal wrangling that bedeviled the opposition community, President Weah and his CDC will have an easy ride at the presidency in 2023.

“It’s a misjudgment. They probably may be mistaken. There are many things for them to understand. They’ve failed the Liberians miserably. The Liberian people have realized that it was a mistake that they brought them to power. And we too are conscious of the fact that we need to work hard to make sure that we rescue our people. So, let them not rejoice too early because we’re not giving up,” VP Boakai intoned.

Speaking further on the internal rift within the Collaborating Political Parties (CPP) that fragmented Liberia’s biggest opposition bloc, Ambassador Boakai said it was never his will and pleasure to go to court against his constituent colleague Alexander B. Cummings, but he had to respect the law when he was subpoenaed.

Speaking extensively on the deplorable roads condition in the country, especially in his own homeland Lofa, VP Boakai said it’s a complete misnomer for President Weah to call himself “Bad Roads Medicine”, rather, he should be called “Bad Medicine for Roads”.

“This government is only interested in building little community roads with little cement and over-priced them. This government, everything they do, they do it to get something out of it. There is nothing this government is doing for President Weah to boast about to call himself “Bad Road Medicine”.

“Go on the Robertsfield Highway. Both sides you create two swimming pools along the road and people can’t get anywhere. There is no proper planning, especially in a country where we don’t already have roads. You say you are “Bad Roads Medicine”, but you are “Bad Medicine for Road”.

“Driving around the country is miserable. I have a farm in Gbarma. To just get to Tubmanburg, I hear people have to pass through Demein, leaving the main road. I can’t understand that.

“In Monrovia the roads may be a bit better but there are always traffic jams. But when you move ahead, you realize there is no traffic jam because there are no police. People are doing things on their own. If you are a potential investor, when you look in the streets in Monrovia, you will decide against investing in such a country,” Ambassador Boakai lamented.

As he expanded further on the bad roads network in Liberia, Ambassador Boakai also touched on the Lofa County Road situation, when he disclosed that the Weah government inherited the blueprint and donor support to do the Lofa Road but reneged on doing its part of the bargain.

“The Lofa Road was designed in 1979, up till now I have the blueprint. And the road unfortunately was to have been launched, but it was when the coup took place. But the road project is a very important aspect that was turned over to this government. There is nothing about it that is new. All of the agreements were signed; the resources were put together, but the implementation of our road project is hand-in-hand with the government. The government had to contribute as a counterpart. This government has reneged on that promise. They don’t intend to do it, for reasons best known to themselves,” Mr. Boakai intimated.

Touching on how he feels when the ruling establishment criticizes him for being an octogenarian who should retire from politics, Ambassador Boakai laughed off the naysayers, terming them as people who are afraid of him

“Those who are asking for me to retire are those who are afraid of me. I am in this country, I have a mission. I am not into politics because I want to go there to make money. I know that I have a purpose. This country needs to be liberated. This country needs somebody credible, somebody the people trust; somebody with proven evidence of performance; and we’re not going to let it go. Constitutionally, we are not barred from running; and the people want us to do so, and we are there to serve the people.

“I was in Margibi County the other day to see our people who had asked me to be there for their endorsement. I brought them a message of hope, to tell them that they made a mistake, but that mistake can be corrected. Liberians are suffering, but we can’t throw in the towel. The future is still there. Together, with the help of God, we can make our future possible. That was the message I took to our people in Margibi. That is the message for Liberia,” Mr. Boakai stated unequivocally.