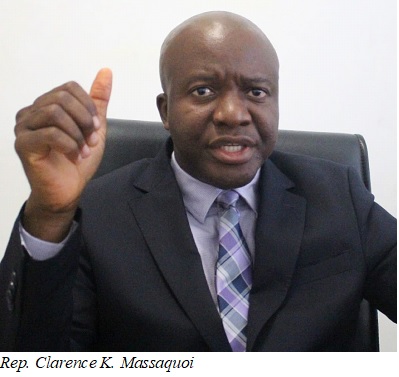 MONROVIA –  A member of the House of Representatives representing District # 3, Lofa County, Clarence K. Massaquoi has expressed his vehement opposition to the controversial pension bill recently passed by the Senate when he led a resistance against the instrument on Thursday, September 8, 2022 in plenary session at the Capitol Building, Monrovia.

The bill titled “an act adopting an integrated pensions and benefits scheme for certain categories of officials of the government of the republic of Liberia and to repeal and or amend certain portions of title 26, Legislative Act, Title 12, Executive Law and Title 17, Judiciary (1972) and the 2003 act which amends these laws”, for the three branches of government, seeks to allot 50% benefits to retired lawmakers, the President and Vice President, Justices as well as circuit courts judges. It also seeks to allow the President to maintain 75% of his staff and assign security details following retirement.

Immediately after the reading of the Engrossed Bill (communication) from the Senate, the Presiding Officer, Deputy Speaker, J. Fonati Koffa recognized the Unity Party lawmaker to initiate the debate where Rep. Massaquoi used the opportunity occasion not only to oppose the bill but also to call on his colleagues to refuse, oppose and reject the bill as if it had never been laid before the House for passage (concurrence).

Rep. Massaquoi argued that given the state of the Liberian economy and the destitution of the population, he believes the proposed law is extremely inappropriate and should not be concurred with by the House of Representatives.

The Unity Party stalwart argued further that Liberia is at such a critical economic juncture that the masses look up to their leaders for patriotic and people-centered decisions (laws) that seek to alleviate the current economic hardship and prepare a better future, and not to enact laws and or make policies that would further perpetuate the sufferings of the people and retard national growth and development.

Amidst unquestionable approval on the plenary floor and the public gallery, Massaquoi reminded his colleagues that the world is watching and generations unborn are preparing their verdicts, as Liberians today are enduring excruciating living conditions. He told his colleagues it was the time for the current leaders of Liberia, particularly legislators to make redeeming laws, carve emancipating policies and lay the grounds for future public acquittal and vindication.

The Lofa County lawmaker is also on record to have vehemently opposed the new amendment voted for by the Senate to declare the positions of all magistrates of the National Elections Commission vacant, and requiring current magistrates to reapply if they desire to serve in said positions.

He averred that the credibility of the impending 2023 election process is a collective responsibility of all Liberians, particularly, national decision makers and the amendment as voted for by the Senate, essentially undermines the sanctity of Liberia’s democracy, especially the 2023 elections.

Representative Massaquoi, who is serving his second six year term on the ticket of the former governing Unity Party, is widely heralded for his bi-partisan robust and insightful stance on critical national issues, especially in the concession sector.

The Chairman of the House Committee on Investment and Concession, has also headed many ad-hoc and specialized committees to investigate and review concession agreements and advise for ways forward. He was one of the leading lawmakers who helped to guide the House of Representatives’ decisions on the pending ratification of the AML MDA that will see the steel giants expand its investment to  US$800 Million.

A NEW PHENOMENON -Pastors Attacking One Another from the Pulpit, Politically

A NEW PHENOMENON -Pastors Attacking One Another from the Pulpit,…