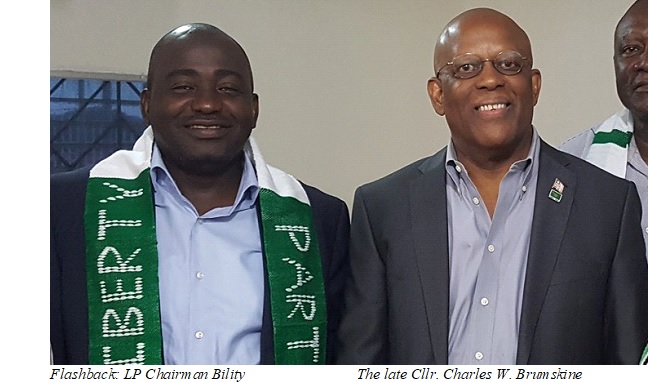 The Liberty Party has demonstrated beyond reckoning that it remains one of the outstanding enduring legacies of the late statesman and politician Cllr. Charles Walker Brumskine when on his 71st posthumous birth anniversary today, the party sent out an emotionally laden but spirited memorialization tribute to hail what the party called his “meaningful, impactful and remarkable life and times spent during his earthly journey”.

“Today, we, partisans of the Liberty Party, remember our HERO, FOUNDING FATHER, and VISION BEARER. Today, we memorialize a man whose journey on earth was meaningful, impactful, and remarkable. One who risked his life to ensure good governance, democracy and the rule of law, even for people who only realized this after his passing. Today, many celebrate your memory and the country remembers you as a legal icon and a respecter of the rule of law”.

The tribute which was signed by Mr. Martin S. Kollah, National Secretary General of the party acknowledged without doubt his deep knowledge and understanding of the law and how he upheld its sanctity as the only remedy for genuine peace and sustainability as well as his uncommon bravery to stand up to any dictatorial regime.

“Despite the brutal and autocratic leadership of the Taylor administration, you braved the storm by returning to Liberia to answer the compelling call of your people for a leader to speak truth to power.  No one can doubt the consistency of your struggle for real change and you will surely be remembered for your unwavering desire to lead this charge for your people”, LP said in its tribute.

Relating the era under which Cllr. Brumskine endured and fought against to the present dispensation, the party said the country is also a reinvention of its ugly past as it is bleeding from the horrible wounds of a total disregard for the rule of law and lack of leadership and lamented that the country has lost an erudite legal luminary and savvy politician.

Recognizing his pioneering role in the formative stage of the Collaborating Political Parties (CPP) where he led LP to the historic signing of the Declaration of Intent for the sole purpose of ensuring an alternative and better governance system in the country, the party, describing him as an astute nationalist, said he would have never stood by idly and watched his colleagues violate the CPP Framework Document (FD).

In a complete display of a fervent belief in his leadership quality and ability to direct and lead from the frontline, the party said it hopes that he is looking down with his blessings as it traverses the current shaky political landscape in our beloved country, adding that they remember the values of rule of law and justice that Cllr. Brumskine taught and fought for during his life and they promise to ensure its continuity within the Liberty Party and the nation.

“In your own words, “We cannot afford to continue with the illusions of the past against the obvious and plain truth; we can no longer continue to be people who have eyes, but see not; have ears, but hear not. This moment is all about remaking our country, believing that our best days are still ahead.

“And so, rest on Cllr. Charles Walker Brumskine! Rest on Boss-man! Liberia is proud of your legal and political accomplishments. Your people and Party are proud of you. You left an impeccable legacy in the fight for justice, rule of law, and democracy in Liberia, and Liberia will always remember you for that”, the statement concluded.

“How the mighty have fallen, and the weapons of war perished!”

“Stop the Lies! -McGill Debunks Reports of Multi-Million Resort He…

“Lofa Will Not be Divided” – JNB -Assures Lofaians of “Better…