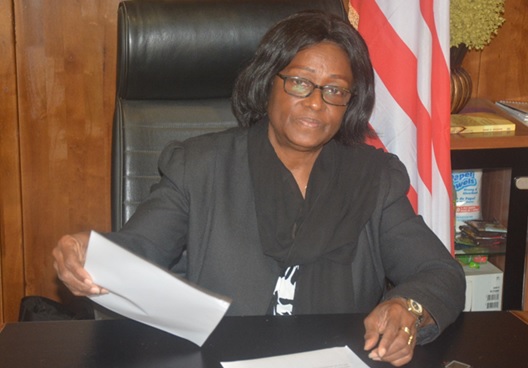 MONROVIA – Following the publication of the full timetable for the ensuing 2023 general elections by the National Elections Commission (NEC), the rebranded Collaborating Political Parties(CPP) raised some issues and rejected the pronouncement, claiming that “the CPP believes that the NEC prescribed campaign period is biased against and prejudicial to the opposition community and in favor and for the interest of the ruling Coalition for Democratic Change (CDC) Party and Presidential Candidate, George M. Weah and therefore called for a 90 day period to allow the political parties the opportunities to campaign throughout the length and breadth of the country to campaign for votes.

In a press statement issued by the opposition block yesterday and signed by its Secretary General Aloysius Toe, CPP said while it acknowledges the authority of the NEC to prescribe the timetable for political campaigning by candidates for presidential and legislative offices, it also expects and demands that the exercise of such authority should respect and protect the rights of political parties and their candidates to canvas for votes within an adequately reasonable period, as guaranteed by Article 81 of the Liberian Constitution which states, citing the article thus, “any citizen, political party, organization or association, being resident in Liberia, of Liberia nationality or origin, and not otherwise disqualified under the provisions of this constitution and laws of the land, shall have the right to canvas for the votes for any political party or candidate at any election”.

“The CPP would like to further remind the NEC that its authority to prescribe the timetable for political campaign also carries a corresponding obligation and duty to exercise such authority within the bounds of reasonable fairness to all parties and ensure a level-playing field, without an appearance of bias and prejudice against opposition political parties and/or in favor of the ruling Party. The CPP believes that the NEC prescribed campaign period is biased against and prejudicial to the opposition community and in favor and for the interest of the ruling Coalition for Democratic Change (CDC) Party and Presidential Candidate, George M. Weah. Moreover, the current timetable (September 4 – October 8, 2023) is inconsistent with the 2 – 3 months historically prescribed by the NEC for campaigning. As an example, during the 2017 Presidential and General Elections, the NEC designated August 8 – October 8, 2017 (2 months) as the campaign period. The CPP wonders why the NEC is now only allotting 34 days for nation-wide campaigning”, the party said.

CPP told NEC that as it may be aware, President Weah has been touring the country and actively campaigning for his second term presidential bid, under the guise of “Presidential Nationwide Tour” and that he has provided 2 pickups, 1 ambulance and 10 motorbikes, in his own name and not in the name of the government, to each Traditional County Council throughout the country and has made numerous campaign statements.  It also stated that Weah’s suspended Minister of State, Nathaniel McGill, has also been campaigning throughout the country, dishing out public money to influence votes.

“These actions by leading figures of the ruling CDC clearly show that the ruling Party has been campaigning actively, and continues to do so, despite there being no existence of the formal declaration of the opening of campaign by the NEC – something which opposition parties are prevented from doing in keeping with law.

“Madam Chair and Honorable Commissioners, the CPP sees the latest action by the NEC to allot only 34 days for campaigning in a nationwide presidential and legislative elections as an attempt to deprive and deny opposition political parties the right to canvas for votes within a reasonably adequate period. The designation of 34 days is unreasonable and inadequate, and will create the condition for opposition parties NOT to travel and cover the 43,000 square miles land area of Liberia, and reach the over 2 million registered voters; something incumbent presidential candidate George Weah of the CDC has already done and continues to do”, CPP said.

The statement ended with CPP requesting NEC to allow ninety (90) days for all candidates to adequately campaign throughout the length and breadth of Liberia. “The request is due to the fact that the rainy season extends to the campaign period, and most of the roads are deplorably impassable, thus making a vast portion of the country inaccessible. We would appreciate you to convene an IPCC meeting with political parties to discuss this and other issues”, the statement concluded.

NEC Warns Against Pre-Election Campaigns -Says Violators will be punished