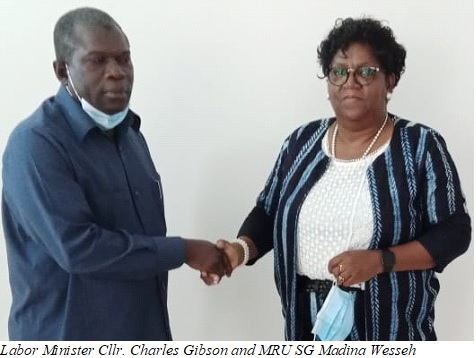 The Secretary General of the Mano River Union (MRU), Madam Madina Wesseh and the Minister of Labor and Chairman on the National Anti-Human Trafficking Taskforce, Cllr. Charles H. Gibson on Wednesday, January 12, 2022 held discussions on the alarming cases of human trafficking within the Mano River Union Community and called for concerted efforts to fight the menace.

According to a press release from the Ministry of Labor and signed by Joseph K. Nyandibo, Director of Communications, the two officials held the discussion when Mrs.Wesseh paid a courtesy visit to Minister Gibson at his office in Monrovia where the two officials had useful discussions that also included the holding of a mini summit on    Trafficking in persons(TIP) slated to be held in Liberia soon

Minister Gibson informed the MRU Secretary General that the MRU bloc has realized that the fight against human trafficking cannot be carried out by a single country, but rather in a coordinated and recognized form by member of the subregional body..

Minister Gibson encouraged the MRU Authorities to take lead in the mini-summit as a means of ensuring that it is successfully held and meet its intended objectives.

Speaking of efforts being made by the Taskforce to combat the trafficking in persons in Liberia, Minister Gibson said that there are several ongoing TIP cases in Montserrado, Grand Gedeh, Gbarpolu and Lofa Counties. He also mentioned about a criminal cartel, Q-Net, which has been involved in human trafficking in the sub-region, but is claiming to be selling online products.

Minister Gibson further informed Madam Wesseh that the United States Government Global TIP Report on Liberia requires the Government of Liberia to address some recommendations, among which are Vigorously prosecute traffickers and convict them, Reform the 2005 Law to Ban Human Trafficking in Liberia to meet international Standards and  Provide victims supports and protections.

He said that the Government of Liberia on its part  has amended the law and hired the services of ten local NGOs to carry out awareness campaign on human trafficking in the 15 counties. He also said that three human Trafficking cases have recently been won in courts in Montserrado and Gbarpolu counties, and that a second safe home is being established with adequate psychosocial support.

For her part, Secretary General Wesseh informed Minister Gibson that development partners have equally expressed their concerns on the illegal movement of people in the sub-region. She proposed to the Minister that the planned mini-summit of Ministers of Labor of MRU States and all relevant stakeholders and partners should be done in collaboration with MRU Authorities.

She also informed Minister Gibson that Guinea is technically the current chair of the MRU and that Ivory Coast is now a member country. She noted that the MRU will provide all necessary guidance and support to ensure the successful planning and execution of the mini-summit which is scheduled for early February this year.

In closing, Madam Wesseh suggested that at the end of the summit, MRU member states should have a TIP awareness communique and issue a joint protocol.

Assessing the Legal merit(s) of the Solicitor General of Liberia’s “Clarifications on The Alexander B. Cummings’ Case” By Atty. Isaac W. Jackson, Jr.

Bility Sues Dillon for $1M -For Slander and Defamation of Character

Drowned In Grief -Sirleafs Update Public on Loss of Family’s…

LP Suspends Nynoblee, Dillon, Zargo, Others -For “Defaulting Due…