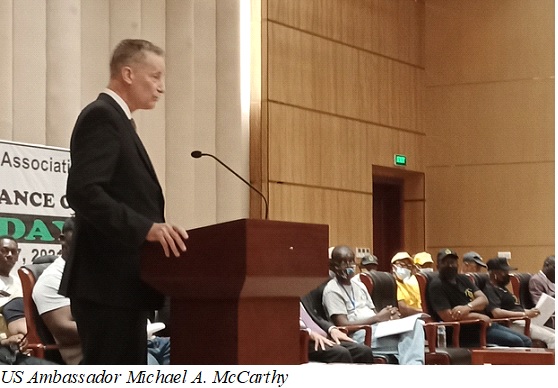 The Ambassador of the Embassy of the United States of America near Monrovia, Michael A. McCarthy, has welcomed Liberia’s National Risk Assessment Report prepared by competent authorities in the AML/CFT regime, and further cautions adequate financial support for Liberia Financial Intelligence Unit to enhance the implementation of its duties effectively and also engage the activities planned in the Action Plan that originates from the validated National Risks Assessment Report.

Speaking at the Law Day program organized by the Liberia National Bar Association on Friday, May 7, 2021, US Ambassador accredited near Monrovia, McCarthy, emphasized that the fight against money laundering and countering terrorist financing (AML/CFT) requires adequate and regular financial support from the Liberian Government, void of delay.

According to him, if much priority is given to the Liberia FIU by the three branches of the Liberian Government, it could encourage credible investors to focus on Liberia to execute sustainable investments.

He mentioned that workable laws need to be enacted by the Liberian Legislature to improve AML/CFT laws to international standards, as the Intergovernmental Action Against Money laundering in West Africa (GIABA) prepares to conduct mutual evaluation of Liberia next year (2022).

The US Ambassador said the protection of the financial integrity of Liberia cannot be overly emphasized, as the second mutual evaluation has gained momentum; as evidenced by the finalization of the National Risk Assessment Report recently by FIU and other stakeholders.

He wants FIU to distribute the risks and vulnerabilities identified in the National Risk Assessment Report to banks and other financial institutions that need to be in full compliance with the AML/CFT regulations in Liberia.

Ambassador McCarthy also called for full compliance of AML/CFT laws by all actors in every sector, as the second mutual evaluation by GIABA could determine the integrity and credibility of Liberia’s financial system.

He added that failure of the Liberian Government to provide financial support and strengthen the AML/ CFT regime, could pose serious threat on the Liberian economy, money transfer and sustainability of investments in Liberia because; the alternative to not prioritize the work of the FIU, could yield unfavorable effects on the country to include Liberia being blacklisted and branded as a safe haven for criminals and their enterprises.

PATEL to Shutdown Legislature June If…

“Give Us the Teeth to Bite” -LACC Boss Tells National Legislature