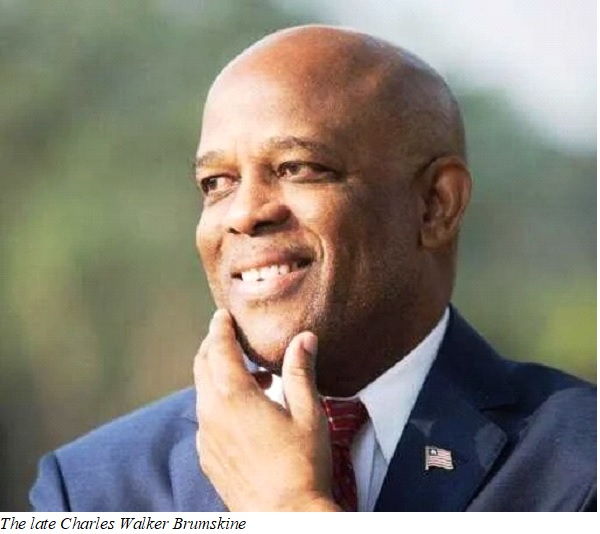 The example of Jesus of Nazareth is instructive and fits all ages: Not all he healed, redeemed and fed were there for him in his ordeal. In fact, those who said ‘hosanna, king of kings’ also later said ‘crucify him’. Who else cannot be deserted, living or dead. But it is also true that there are hardcore faithfuls. Everyman has them. Cllr. Charles Walker Brumskine, who stood in the gap of many and lived his life for the benefit of others, did have his, and as he posthumously clocked 68, they came together on his birthday, April 27, to memorialize and adore him. Of course they all had very fond words spoken from their hearts, as The Analyst reports.

It could be compared to a political carnival of some sort when Tuesday, April 27, 2021 associates, colleagues, admirers, family members various groups and individuals from diverse background stormed the auditorium of the University of Liberia to memorialize the late Cllr. Charles Walker Brumskine, former political leader of the Liberty Party . The program was held under the auspices of the Charles Walker Brumskine Memorial Lecture Series.

Giving the background of the Charles Walker Brumskine Memorial Lecture Series, Mr. Jacob J. Smith, who chaired the organizing committee traced the political history of the country as being punctuated with bad governance, disrespect for the rule of law, love for personal wealth at the expense of the people as have been demonstrated by people in high places of political power.

Speaking further, Mr. Smith said every historical period in our political life has its peculiar actors. He said in the immediate aftermath of the 1990 civil war there emerged on the country’s political landscape a man called Cllr Charles Walker Brumskine who would later on go on to be a sterling character and leader to inspire a whole generation of Liberians to build hope in the people.

While launching the memorial lecture series, Mr. Debar W. Allen, a founding member of the Friends of Brumskine, USA branch said the launching of the exercise on the 70th birthday of the legal luminary was to accentuate the profound impact the late politician had on the promotion of rule of law and good governance in the country. He said the series will not be broad based and not be affiliated to any political platform so as to afford the people the opportunity to have a broad and balanced perspective on national issues as such the venue of each every series will be held on a neutral ground.

“The series aims to enrich our quest for the promotion of the rule of law and good governance in the country. We want to make it to produce the right platform for a thriving leadership that will be responsive to the needs and aspirations of the people.

The Keynote speaker of the occasion Cllr Oswald Tweh, first went in the memory lane to relate to events that linked him to the late legal giant which blossomed into a long lasting relationship. He said he first met Cllr Brumskine in 1983 when as a first year student of the Louis Arthur Grimes School of Law at the University of Liberia, Cllr Brumskine was serving as an Assistant Professor specializing in commercial law.

“He gave me the rare opportunity to work with his law firm as an intern/cadet while I was attending the law school. I later on worked there permanently after my graduation and our relationship became something like a big brother-small brother relationship.” Cllr Tweh said.

He spoke highly of his work ethic, sense of humor, professionalism and the desire to offer selfless services to some clients who could not afford legal fees to pursue their cases in courts. He continued that the desire to offer free legal services to indigent clients is something the late lawyer took from his later father who did similar things for people who could not afford in Grand Bassa County for which he was referred to as a “poor man’s lawyer”

Speaking on the topic BUILDING A NATION ON THE PLATFORM OF RULE OF LAW AND GOOD GOVERNANCE, Cllr Tweh who once served as President of the Liberia National Bar Association (LNBA) said the topic is relevant to both to the country and its people because for any country to succeed, it must be able to uphold the rule of law and exhibit the tenet of good governance. He maintained that to have this, the burden rests on both the government and the citizens.

He said citizens have to take action to shun mob justice, taking issues in their hands without going through the courts, etc. He said Cllr Brumskine took serious steps to make use of the courts to resolve issues or seek legal interpretation of what the law says on an issue.

Cllr Tweh touched on the controversial Status of Forces Agreement (SOFA) which according to him was highly misunderstood and misinterpreted. He said between 1994-95, Cllr Brumskine and other Liberian lawyers on behalf of the country negotiated with ECOWAS for the interpretation of SOFA which even originated from ECOWAS and not Cllr Brumskine as was erroneously believed by others then.

He said SOFA is a universal concept under international laws. It is done at all times when foreign troops go into another country.

“What SOFA sought at the time was to interpret the rights of the citizens of Liberia vis-à-vis the rights of the ECOMOG soldiers in the context of legally solving an issue when they occurred. There must be a binding agreement to resolve said issues. Even during the Ebola crisis when the US government sent troops here, they signed an agreement with the Liberian government”, Cllr Tweh said.

Cllr Tweh who spoke excellently of the late outstanding figure said that Cllr. Brumskine as a politician was a man of integrity and had a bold vision about the country. He also spoke of his zero tolerance against corruption and a man of nonviolence.

Emphatically he spoke how Cllr Brumskine respected and practiced rule of law to the extent that when he was not satisfied with the results of the 2017 general elections, he contested same at the Supreme Court and called on his supporters to accept the verdict of the court as the final arbiter of justice in the land. He said not many people will resort to such an option.

Cllr Tweh said that when he served as President of the Liberia National Bar Association, the source of the successes recorded was rooted deeply in what he learnt from Cllr Brumskine because he was able to apply them appropriately.