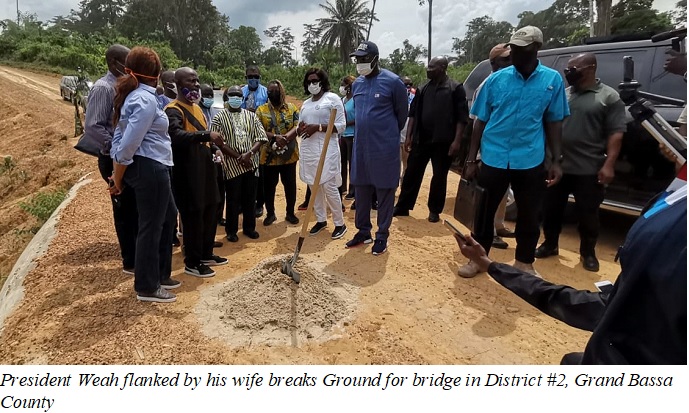 It has been quite a memorable time in Grand Bassa County since the arrival of President George Manneh Weah in that southern province. Before inks ever got dried on reports of how the people of that county swarmed President Weah and entourage in the port city and long the tarmac highway from Farmington River to Buchanan City, those in other parts of the county registered their own overwhelming reception that took many spellbound. District Two and Towns rose up in their numbers and in typical traditional Liberian welcome until the President, moved by the clamor for him by the locals, gave an emotional response not just to the colorful ceremonies organized by the people but also to the development needs expressed by the people.

Citizens of District #2, Grand Bassa County made good their joy seeing President George Manneh Weah in their communities (Compounds 1 & 2), the first sitting Liberian leader to visit those parts of the county, by turning out massively to give him and party a rousing welcome yesterday, Thursday, April 22, 2021.

An avalanche of women groups, elders, traditional rulers, youth groups, students and other residents were all in a very exciting mood when the President made a triumphant entry in the Districts.

After the usual welcome formalities, the President, accompanied by his wife Mrs. Clar Marie Weah and party, had a town hall meetings during which various groups spoke, one after the other, welcoming the President and party, praising him for what he has been doing for the country in such a short time and presented a couple of requests for his attention and action.

The Chairman of the traditional council of Liberia Chief Zanzar Kawor who led an array of other traditional rulers in county, welcomed and thanked the President and party for the visit and wished them a happy stay in the county.

They praised the President for the developmental strides he has undertaken since his ascendency.

As an expression of their satisfaction to welcome him, Chief Kawor, on behalf of the chiefs gowned Mr. Weah with a stylish traditional garment which he described as a symbol of authority and power.

He also said the gown represents 2023, the year of the Presidential and General elections which he was sure the people of District #2 will turn out to reward the president with a resounding victory.

He also presented another gown to the first lady Mrs. Clar Marie Weah. The boss of all Liberian chiefs said the gift was in recognition of her loyalty and support to the President.

He called on the First Family to wear the gifts with pride and dignity.

The traditional chiefs made request to the President to assist them with vehicle and motorbike that will enhance their mobility so as to be able to reach out to citizens in all corners of their jurisdiction to discuss issues of concern to the people.

The chiefs made available a 150 acre of land to the president for agricultural purpose.

The women groups, for their part, extended thanks and appreciation to the President and told him of their willingness to get involved with the development agenda of the government.

They appealed to the President to enlist them in the empowerment program of the government with assistance to start various marketing activities.

The women group also made an appeal to the president for an addition health center to buttress the activities of the already existing one that was built by the lawmaker representing the district, Mrs. Mary Kawor, the wife of the Head of the traditional council of Liberia.

They said before then, pregnant women used to be taken to Bong County for delivery at the existing medical facilities there.

The lawmaker representing the constituency, Mrs Mary Kawor, said in her remarks that she wholeheartedly welcomed the president and entourage to the district.

She said the people were so excited to see President Weah, being the first Liberian leader to visit that part of the country.

She said on her own expense, she was able to do the only road connecting the two districts but there is a serious impediment of bridges and culverts since the wooden ones are not durable.

She also spoke about challenges in the area of education where she appealed for schools and qualified teachers to address the acute problems the students and parents go through.

“2023 is here already. Our people will definitely pay back anyone who will help us,” the lawmaker said while assuring president that the people will look on his side in 2023 when he helped them too.

Responding to the people, the President George Manneh Weah, thanked them for the overwhelming welcome he and his encourage received during the visit and told them that their decision to vote him in 2017 will not be wasted.

He said he too has been visiting other areas and he continues to hear the same requests for paved roads, schools, hospitals, amongst other needs.

“We are aware of all the problems you are encountering because the same problems of roads, schools, hospitals, lights, are the same problems we are hearing from all other areas. But you know, development is a process, not an event. We will continue to work for our people and do those things they want,” Mr. Weah said.

He promised to provide the vocational training center for the young people of District #2 to enhance their education and ability to acquire skills for the job market.

He specifically extolled the efforts of Mrs. Kawor for her sterling leadership quality and the level of development she has brought to her people. “I must commend you for what all you have done for your people. That shows you are really for the people and the people are also for you. I want to give you a new name, Your new name is “bad forest medicine” because you brought this road in this forest for your people to be able to move around,” the president said.

In the area of health, the President instructed the Minister of Health, Dr. Wilhemena Jallah to work with the county officials and local authority to address the problems of the health challenges by working to have additional health facilities and more drugs for the area.