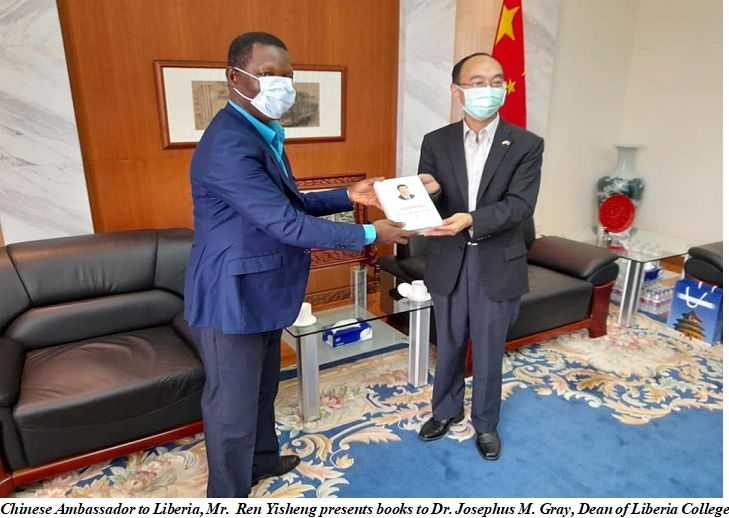 One of Liberia’s famous, robust and revolutionary editors, the late Fredrick Taylor of the Cruzierville Observer once sounded that the task of nation building does not rest on the shoulders of a single human being rather it’s an ever ongoing task for all men and generations now and to come. In a broader expression, it must be incumbent upon all Liberians to be torchbearers in the quest and challenges of nation-building no matter where, place and capacity the people may be found in the true spirit of nationalism.

It was in this vein that the Dean of Liberia College (College of Social Sciences and Humanities), University of Liberia, Prof. Dr. Josephus M. Gray during a courtesy on the Ambassador of the People’s Republic of China (PRC) to Liberia, His Excellency Mr. Ren Yisheng, discussed and exchanged  a wide range of salient issues and views.

Professor Gray’s courtesy call  at the Chinese Embassy highlighted the cardinal interests of both countries mainly Liberia; major issues of mutual concern, including the fight against coronavirus, career development, education, scholarships, training of faculty, as well as long and short times capacity building of faculty.

During the visit on Thursday, April 1, 2021, Dr. Gray also in a brief history, introduced Liberia College as the Second Oldest Institution of higher learning in West Africa and the Fifth Oldest College on the African Continent, was established by the Liberian Government barely fifteen (15) years after the Independence (1847) of the Republic of Liberia.

The purpose of the courtesy call was bordered on the Dean’s desire to convey greetings from the institution, and to acquaint the most senior Chinese Diplomat in the country of the College’s achievements, academic programs with emphasis on academic excellence, quality research, teaching, and creative thinking.

Liberia College’s Dean also told Ambassador Yisheng that the College was founded 1862 on an agenda of social responsibility to the Liberian Society and the world to provide educational access to the nation and other nationals across the globe.

He emphasized that this agenda has served the institution and its students well since 1862, and added that China’s current engagement with Liberia has been productively pro-active evident by the numerous visibility of tangible projects in the country. Professor Gray assured Ambassador Yisheng that the institution will always work towards sustaining closer ties with the Embassy of China near Monrovia.

He stressed that China has been an important friend to the people of Liberia, and recounted China’s numerous supports to Liberia, especially in the areas of foreign aid, infrastructure development, education, health, road construction and capacity building.

The Dean asserted that China has accomplished in a relatively short period of time what took developed countries hundreds of years to accomplish and become an upper-middle-income country from a low-income one; the country has now overcome the great divergence of development among different nations formed after the first industrial revolution, and made a miraculous economic catch-up far from behind.

Dr. Gray then welcomed the Ambassador and wished him well in his tour of duty to Liberia and extended an invitation to him to visit the Fendall Campus of the University of Liberia for a guided tour of Liberia College

In his welcome remarks, Ambassador Yisheng stated his gratitude and openness for cooperation with the University of Liberia, considering that the relations between China and Liberia have been going very well. Ambassador Yisheng also recounted his fruitful and meaningful meeting with the President of the University of Liberia, Prof. Dr. Julius J.S. Nelson in the Embassy of China near Monrovia.

He, likewise reaffirmed the strong relationship, remarking that the relations between China and Liberia have been fruitful and rewarding.

During the meeting, Ambassador Yisheng expressed the willingness of China to deepen its cooperation with Liberia, particularly in the areas of cooperation and the fight against coronavirus, development, and interactions on major issues of mutual concern.

Dr. Gray thanked Ambassador Yisheng for the books and promised to reciprocate to present few copies of his peer-reviewed book: “The Effect of Diplomacy-Liberia, U.S.-China’s Relations”. The book contains 566 pages, 3,123 paragraphs, 202, 916 words and 2, 470, 268 characters both single and double spacing while it contains 9,750 punctuation marks, 855 in-text citations.  The book also contains 590 references and 16,265 lines. It is organized into three major parts and comprises ten major chapters, and sums up the findings of the study, and gives recommendations.

All Set For 2nd Edition Of Pennoh Bestman Memorial Tournament