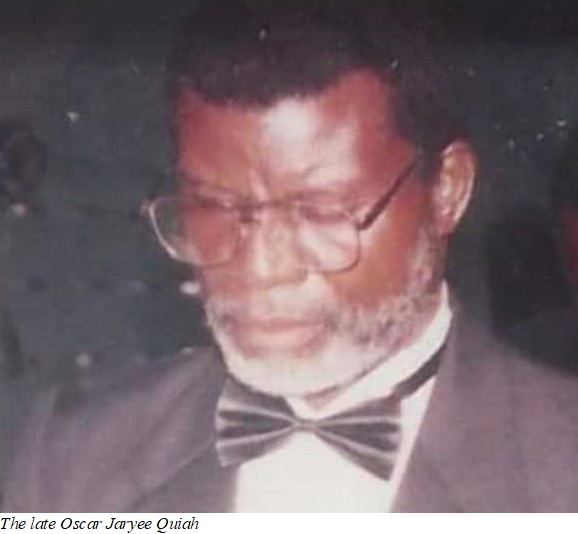 Liberia’s political history will never and can never leave out 1980 and the events that precipitated April 12 of the year. That was when a 133-year oligarchy or family governance system ended in the country. The events did not unfold naturally. They did not come out un-propelled. There were drivers—people of fresh and blood, audacious young people—who rose up persistently and gallantly to expose the farce and cruelty of a ruling elite, ripening a hegemonic regime for elimination. They call themselves “progressives”. Amongst them was the Sarpo progeny, Oscar Jaryee Quiah, who became widely acknowledged and credited as one of the ideological pathfinders of Liberia’s progressive movement that came in two advocacy tributaries—the Progressive Alliance of Liberia (PAL) and the Movement for Justice in Africa (MOJA). OJ, as his peers called him, was of the PAL dogmatic extraction. The sad news now is that OJ has fallen to the cruel hands of death, though after a protract period of illness, and many a progressive and adherents of the progressive struggle have been inundating the social media with eulogies. The Analyst picks up a few distinct tributes.

One of Liberia’s legendary political activists has died. The death news of Oscar Jaryee Quiah saturates the social media as the reactions that came from family members, friends and former allies in the “struggle for rice and rights”.

Mr. Quiah was the first Minister of Internal Affairs of the People’s Redemption Council, the military junta administration formed by the plotters that overthrew the nearly 9-year old government of William R. Tolbert, the 111-year reign of the True Whig Party and 133 years of settler political domination in Liberia.

He later became Managing Director of the Liberia Telecommunication Corporation of that regime. He hailed from Sinoe County, of the Sarpo stock.

The news of his passing has been greeted with spontaneous sentiments from many quarters, with a number of citizens expressing grief and condolences.

A noted progressive, who endured as much bruises of the struggle, Dr. Henry Boima Fahnbulleh, Jr, is amongst many who swiftly reacted.

He wrote: “On the passing of Comrade Oscar Quiah, may he rest well. A great fighter for our people’s redemption. On the other side of the progressive camp, he was the closest friend I had and I respected his fortitude, dedication and honest interaction. He was a patriot in the tradition of Juah Nimley, S. Raymond Horace, D. Twe, Marcus Gbobeh, Wiwi Debrah, etc—all legendary fighters for our people’s emancipation and advancement. Great fight Jaryee! A marvellous struggle!!”

Dr. Fahnbulleh continued: “It is a tragedy that many of them still don’t understand but a legion of young patriots is coming up who with courage and consciousness will carry this struggle to its logical conclusion. This conclusion as we discussed in the filthy cell of 4B at the South Beach prison in 1979 and subsequently, must lead to the popular participation of the broad masses and their eventual determination of the historical trajectory that will lead to dignity, social justice and unity! Salute militant, salute!!”

A kinsman of the fallen progressive legend also poured out some fond words for OJ. Ojuku Nyenpan, brother of the recently fallen Public Works Minister Mobutu Vlah Nyenpah, wrote on his Facebook page:

“From Wejah in Sinoe County to the Executive Mansion in Monrovia, Hon. Oscar Jaryee Quiah has left an indelible mark of service to our people, and nation. A beacon of hope, a leader of unmatched charisma, a hero of great courage and valor, OJ will forever be remembered. His death has left a void that we as a people must rise up and fill. The people of Wedjah have lost their shining star; the people of Sinoe have lost a generational leader, and Liberia has lost an impactful politician.

“My profound sympathy to the bereaved families. Take heart believing that God Almighty is in total control. May the passing of this great man reignites the spirit of unity and purpose among our people. May the soul of our hero rest in perfect and perpetual peace.”

Another Liberian, apparently admirer of the former Internal Affairs Minister, calling himself Ebenezer Barclay released a moving tribute on Facebook when he wrote: “Jaryee, as you were called by your tribal people while the Progressive called you OJ. You were that fearless Progressive Fighter! I can recall during the regime of the Late Samuel K. Doe, you voluntarily turned in yourself when State Securities were in search of you upon the order of the then President, at that time I was a child under your roof. Of recent, when Mobutu Vlah Nyenpan passed and you got the news, you cried bitterly. These were your words, ‘Mabutu, why? Why you left us? I was looking up to you to take over from me as the leader of our people. You know I am not well’.

Ebenezer said further: “Those of us that were around during the struggle for social justice by the Progressive will always have a place in our hearts for you all. I am calling on those Progressive who are still alive Ambassador Wesley M. Johnson, Dr. Sawyer, Dr. Fahnbulleh, Dr. Tipoteh, Dr. Dahn, Cllr. Supuwo, Professor Alaric Tokpa, Old Mayor, Edward Farley, Samuel P. Jackson, Marcus George, just to name a few, to come out with a book outlining your (Progressive) fight for social justice in Liberia. It’s important because the current young generation doesn’t know your role played to get us to where we are that today as a country to have a Tokpa, a Konneh and the list is endless to be in national leadership.  RIP Jaryee, RIP OJ, RIP Oscar Jaryee Quiah.”