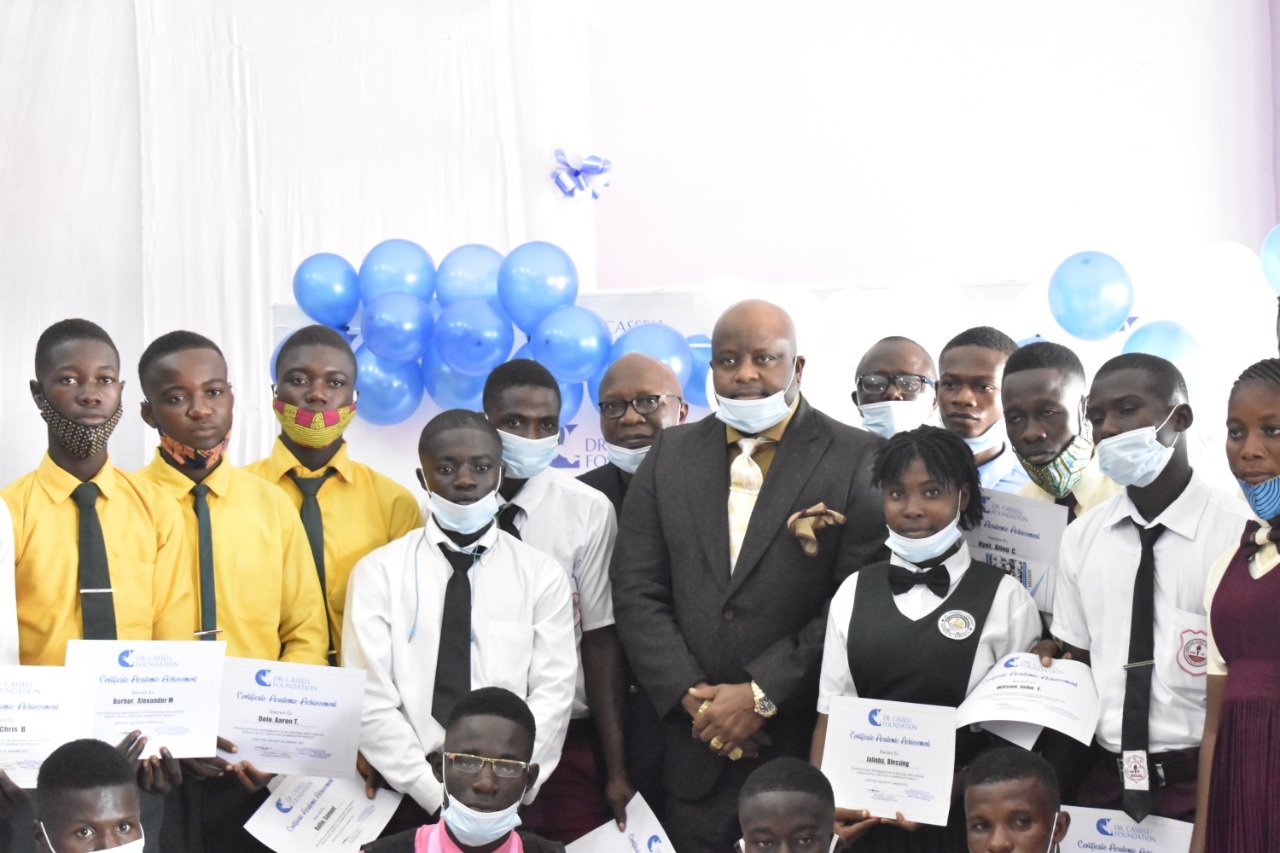 Thirty-nine Liberian students who successfully passed the West African Secondary School Exams (WASSCE) are proud recipients of US$2,000 from the Dr. Cassel Foundation as its contribution to promoting quality education and academic excellence in the country.

On January 15, 2020 the Dr. Cassell, Founder and CEO of the Foundation hosted and honored the 39 top performing Liberian students, stating that his foundation said was pleased to identify with the students who represented the 12 of the 15 counties of Liberia, excluding Lofa and Maryland counties.

He explained that the two counties were excluded due to the under-performance during the exams.

Dr. Cassell further explained that out of the 13 counties, Montserrado produced the top three highest national performers—Blessing Jalieba and Alicia A. Wright of St. Theresa Convent. The two took the first and second places with cash prices of $500.00 and $450.00 (USD) respectively.

He also named Lela P. Wapoe of Light International School System earning the 3rd place and a cash price of $400.00 (USD) and a certificate.

The rest of the other students who ranked the highest in the remaining of the 12 counties received a cash price of $100.00 (USD) each and a certificate.

The Founder said the gesture was the Dr. Cassell Foundation’s way of recognizing and encouraging the young children to invest time and hard-work in their education, so that they would be well prepared to lead as the future generation of our nation.

Speaking further at the the program, Dr. Cassell asserted that the gesture comes from the backdrop of his early beginnings, growing up as a struggling school boy with a huge ambition for positive future.

He indicated that he’s no different from each of the students, stating that there were times in his past when things became more difficult because of his social and economic status, mainly because of the early passing of his father when he was an 8-year-old kid.

He narrated that he was left behind with a single mother, who cared for six children (4 boys & 2 girls) during which time here was nowhere to turn while some other days he also felt hopeless, seeing that nobody wanted to have any association with him due to low status.

But he said he found strength and refuge in education and, by God’s grace, he was able to finish high school and college.

A parent of was parent at the occasion on behalf of all other parents hailed Dr. Daniel E. Cassell for his thoughtfulness to give students a cash pat on their backs as a way of encouraging them in the pursuit for higher education.

Speaking on behalf of his colleagues, the foremost performing student, Blessing Jalieba, of the Catholic-run all-girls school “Theresa Covent High School” extended gratitude to Dr. Cassell, whom she called “Liberian Liberator” for the gesture.

She encouraged her colleagues to realize that what they achieved was not, and should not, be the end, but rather should serve as motivation for them to push harder in their educational sojourn.

Many Liberians have been expressing their appreciation to Dr. Cassell for this kind gesture which comes as motivating to the students to do more.

They also recounted the countless helpful works done by the Liberian Humanitarian of the Year 2020.