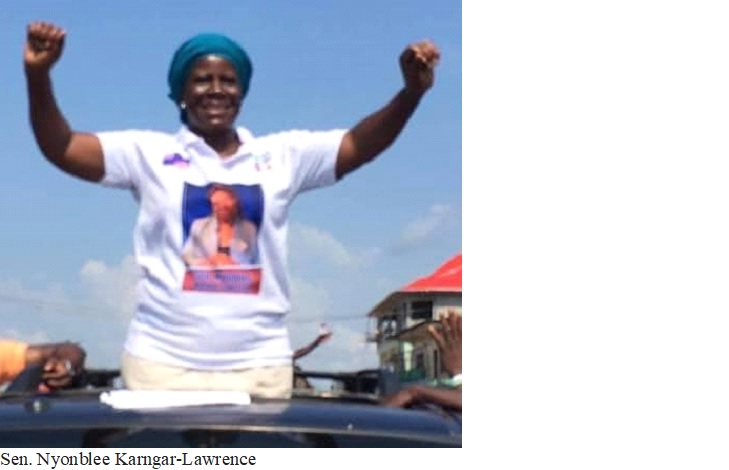 Saying the Message is clear, the winner of the Midterm Senatorial Election in Grand Bassa County, Nyonblee Karngar-Lawrence says the Liberian Senate has moved from minority to majority and is now looking forward to elevating its oversight responsibilities and making the right decisions, noting that the Senate has the reputation and the numbers to make that happen.

“The people of Liberia have identified and elected their true leaders, our opponents and the president have also demonstrated that the voices and decisions of the people matter,” the incumbent who was reelected in Grand Bassa indicated, and pointed out that she received a called from her main contender Gbezongar Milton Findley, Mr. Vincent Willie and a pour of congratulatory message from President George M. Weah on the occasion of her victory.

“I informed the president in my response that our doors are opened for collaboration in the interest of our Country, and it has been welcomed by him, we look forward to that,” Senator Nyonblee Lawrence asserted.

She acknowledged that they “have moved from minority to majority in the Liberian Senate and looking forward to elevating our oversight responsibilities and making the right decisions as always.

“Yes the Senate can ensure that Liberia is governed properly and we have the reputation and the numbers to make that happen. We await the results from Gbarpolu and Nimba, and also believe that NEC will ensure that it’s a fair process, she said and concluded, “Liberia Wins! We are proud of the people of Liberia”

Recently, Senator-elect Nyonblee Karngar-Lawrence was declared winner over Gbehyzohngar Milton Finley at the end of their duel for the Senate Seat of Grand Bassa County during the 2020 Midterm Midterm Senatorial Process.

Nyonblee was among topnotch opposition politicians thar are being elected to the Senate. Evidently, four vote-rich counties have fallen to the opposition CPP in whereby candidates of the opposition bloc have clinched to victories in River-Gee, Grand Bassa, Lofa and Bong Counties respectively, while the CPP’s Darius Dillon tightened grip on the highly Contestable Montserrado County with 61.28% over his Coalition for Democratic Change (CDC) opponent Thomas Pangar Fallah with 35.77%, according to official results by the National Election Commission (NEC), last Saturday.

Nineteen political parties and 2.47 million registered voters participated in the process; voting took place at 2080 voting precincts with 5,911 polling places, the National Election Commission has disclosed on its website www.necliberia.org,.

Some other non-CDC contestants declared as winners of the Midterm Senatorial Elections. Those include a former soccer star Jonathan Boycharles Siagbeh of the CPP for River-Gee.  Siagbeh, with 4,972 votes accounting for 33.59%, dragged the CDC’s Charles Korkor Bardy (4,598 or 31.06%)  at the polls just as in Grand Bassa,    Also in Lofa County Lofa, former National Defense Minister J. Brownie Samukai won with 17,377 votes or 30.01%; his main contender Joseph Kpator Jallah has 13,805 votes amounting to 23.84%; while the CPP’s Bong County candidate who is the current Deputy House Speaker Prince Moye won with 39,337 votes accounting for 51.28% over the CDC’s Henry Yallah (25, 247 or 32.91%).

Also declared as winner by the NEC Chairperson for Rivercess County  is Willington Geevon Smith with 3,284 amounting to  23.45%;  Senator-elect Smith flogged his main competitor,  independent Candidate Steve Tequah (3168 or 22.62%); while Independent Candidate and sitting Bomi Representative Edwin Melvin Snowe, won the Bomi race to the Senate with 16,476 votes constituting 53.97%;  he defeated at the polls  the CDC’s Alex Jenekai Tyler Sr. who amasses 8,834 or 28.94% and  Sando Dazoe Johnson of the CPP who gets 2,994 equivalent to 9.81%.

With these and other results dominated by independent Candidates, Senator-elect Karngar-Lawrence is confident that the Senate can now turn the tides of poor governance through its oversight and other legislative responsibilities

The Liberian Senate as the upper House of Legislature has the oversight responsibility to ensure the responsible personalities are appointed to public offices, considering that the Senate has the is the only authority that screen and confirm appointments in government ministries and agencies, and by far hold Executive officials accountable for their conducts in public offices.

Article 54 of the Constitution provides that “The President shall nominate  and with the Consent of the Senate appoint  Cabinet ministers, deputy and assistant ministers;  Ambassadors, Ministers, consuls; Chief Justice  and associate justices of the Supreme Court and judges of subordinate courts; Superintendents and other county officials  and officials of other political sub-divisions; members of the Military from the rant of Lieutenant or its equivalent and above, Marshalls and Deputy Marshalls and Sheriffs.

By definition of this article, the constitution of   the government with impeccable and astute individuals lies on the shoulders of the Liberian senate which also has statutory committees to ensure oversight for the wholesome functioning of the society.

Prior to the 2020 Midterm Senatorial elections, the Liberian Senate was dominated by members of the ruling Coalition for Democratic Change, which most people blame for the dysfunction of the country’s bureaucracy, which witness the most criticized impeachment of Justice Kabineh Jan’eh, the uncontrollable inflation in the society, the misuse of public resources etc.

At times, Executive Officials show disrespect to the National Legislators for reason that they enjoy Presidential backings which they thought rendered them untouchable despite the contempt of Legislature powers provided for in Article 44 of the Liberian Constitutions.

With Collaborating Political Parties and other senators largely elected as independent candidates taking over the Senate, Senator Nyonblee Lawrence signal that “the message is clear that the Liberian Senate is ready to work, and that it now has the number to perform to public expectation;” writes Bill K. Jarkloh.

Government of Liberia, through the Ministry of Mines and Energy, has described as a…