COP PROTESTS TODAY -But Police says No Permit, No Protest 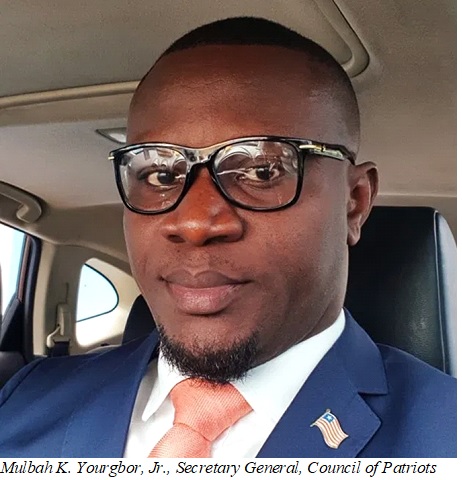 The Council of Patriots, a political pressure group that organized the June 7, 2019 protest which converged thousands of Liberians at the seat of Government on Capitol Hill, says today,  Monday, November 16, 2020 it will stage a protest as a wakeup call against the failure of the Government of Liberia and the World Food Programme (WFP) to deliver the COVID-19 stimulus package; as well as government’s failure to address the mysterious deaths of four audit professionals who died back-to-back last October under dubious circumstances when officials of the Liberian government were being investigated for mismanagement of the COVID-19 funds. Today’s protest also comes on the heels of the December 8, 2020 midterm senatorial and referendum elections.

But, police spokesman H. Moses Carter has told journalists that Police will not allow any street protest from the CoP without Permit.

Addressing a press conference in Monrovia Wednesday, November 11, 2020, the Secretary General of the Council of Patriots, Mulbah K. Yorgbor, said the ruling CDC government is running the country in a manner that the people can no longer feel secured to identify with their political parties.

“We did not see what we are seeing over the last three years of the George Weah administration during the 12 years of the Ellen Sirleaf Administration.  People today cannot freely identify with their parties for fear that they may be brutalized, harmed or even killed,” the COP leadership said.

“This has to stop!  That is why we at the COP say enough is enough’’, Mr. Yorgbor asserted.

According to Mr. Yorgbor, elections are transitory, and that after elections there are critical issues of governance. But he said, unfortunately, the CDC led-government has refused to govern since the 2017 elections. “They are still in partisan mode; and because of that, they have neglected leading this country to nobler destiny.”

Mr. Yourgbor furthered that partisan sentiments have engulfed the country to the extent of eroding the cohesive nature of the national fabric.

At the same, he disclosed that the November 16, 2020 protest is on course.  The COP leadership said the Council of Patriots is urging every well-meaning Liberian to turn out in their numbers today Monday, November 16, 2020 to tell their government that “we are all affected by the mismanagement of the country’s resources.”

He noted that the argument is not about opposition, it is rather about Liberia. “When the exchange rate is 150, and the Liberian dollars has gained so much value in a week, while commodities are still priced the same way with no reduction to present the economic realities, it is the citizens that suffer,” Mr. Yorgbor lamented.

He further disclosed that the government has borrowed 50 million United States dollars from the international monetary fund. Of that amount, he said 30 million was set aside for the distribution of much-needed relief packages in the wake of the outbreak of the coronavirus pandemic over six months.

“Since May, this money was acquired and the government has not reached out to the intended targets. There is a conspiracy of a collusion between the government of Liberia and the World Food Program (WFP) to steal from the Liberian people,” he explained.

Yorgbor said it is even more embarrassing because the WFP has just won a Nobel Peace Prize, which he said he is not convinced that the UN agency in Liberia won on the back of stealing from citizens of a country in which their efforts are meant to serve the greatest interest of these people.

“The WFP must come clean; they were contracted to roll out the stimulus package; they gave a certain amount in administrative cost which the government made available,” he furthered.

Yogbor said, as a matter of fact, the money was deposited in the WFP’s account solely because the agency is assumed to have the requisite experience in dealing with the distribution of relief items around the world. For this reason, Yorgbor said WFP was expected to have done their own environmental impact assessment analysis that would not stain their reputation in the country.

In the wake of the WFP failure to have conducted an environmental impact assessment analysis for the COVID-19 stimulus package distribution, former Minister of Commerce Wilson K. Tarpeh justified the failure of delivering the stimulus package to bad road condition.